Caroline Kearney Olympic Triathlon is a lake swim around Lough Ennell in Mullingar, followed by 2 laps of a relatively flat bike course and a 10k run around again relatively flat.
So a nice course then, and a good one for my first race on my Tri bike I picked up recently. 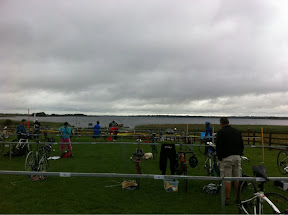 I registered Friday to drive the bike course as there were a few turns to be aware of and I wanted to check road surface and how tight the turns were.
Nothing major to report so down Saturday morning to a slightly misty day.

The swim was uneventful and I started in wave 1 but went offline to the right on way out, and again to the right on way back. So taking the long way again and I know I must work on my sighting more often in open water.
Out of the lake and look back to see a few, check watch at 27odd and relatively happy. Into T1 and wetsuit a little slow to remove but out into the bike. Now I had put my sunglasses on as it was slightly raining. this turned out a waste and after first couple k I removed them and stuffed them into my mini side pockets. They had misted up and the rain was hampering my vision so I was better off without.
There was a slight wind and I felt a few gushes to the 808 front but nothing uncontrollable.
My bike went to plan, I pushed and had my gel at 10k and kept up a good pace. A club mate was watching and gave me 17th after lap 1, so I pushed some more and came into t2 around 12th from first wave. Now one of my goals this season was a sub 65min 40k in Oly race. This was achieved in around 1:03 but my bike split was 1:07 due to the extra 2k - total bike 42k.
So I took the few seconds to put on socks as it was a 10k and I had new runners.
Out on the run and my feet were a little numb to start but I was maintaining sub 4min/km's so on target. Blood flow returned and I kept up the pace. I got passed by some here from about 5k onwards as the fast runners took me out. I maintained my goal pace though and delivered a sub 40min/10k for the first time in a race so I was happy.
So that was 2 goals achieved, another was a top 25 finish in a national series and I had crossed the line around 16th from wave 1, but still wave 2 to finish with some fast guys doing well so it would be close. Luckily I placed 23rd so 3 goals achieved now.

I finished in 2:16 and some 10mins behind the winner. So solid progress made compared to the start of the season.
Comparing 2 top guys in particular to 2 previous races this season:

So down 14mins over a sprint in first race this year!

So 20mins down over Olympic in early July.

So now 10 mins down over Olympic distance.

So that's some measurable improvement since the start of the season for my first year. Now a Tri bike has definitely helped, but also more specific technique and run track sessions as well as other training.

This was definitely my best race yet and a nice course so I'll be back next year.

Hopefully I can stay on track or even better in Dublin City Oly Tri and then start off season training after a short break to see if I can increase my pace all round for next season...

So 9 triathlons done this season and just 2 more left now. Or 11 of 15 total races inc duathlon and runs.

Last 2 triathlons are Tramore this Saturday (did this last year and also local to home town Clonmel). Then last race at Dublin City in 2 weeks.

So I'm off to the track for a pyramid pain session now.