Race report - Beast of the East

Ok so yesterday saw me do my first Beast of the East Olympic triathlon in Roundwood, Co Wicklow.

Arrived and directed to park in a field. Transition was set up beside the Lough Dan lake swim and bikes were numbered and in club order, all be it a bit tight. 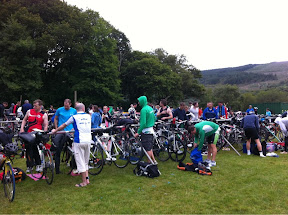 It actually started misting as we were setting up but luckily dried up then. The swim was a rectangular course around 4 buoys. There were some fast fish entered and Bjorn Luddick and Stephen Early no doubt would lead out of the water.
Anyway, so the swim was a deep water start and I set off at a reasonable pace. I've been working on a better catch and more swim training so was hoping for a better result.
I did feel myself go off line but corrected reasonably early, but I definitely felt a fade around the 2nd and 3rd buoys. So better swim race pace fitness is required as well as technique!
Out of the water in 28odd which wasn't too bad but still around 40 ahead of me.
Massive difference to the 2 leaders in 19odd though! Hopefully I can bridge that gap in the off season for next year.

So into transition and over to my bike, bit of a slow removal of wetsuit and as I headed out I realised I forgot my energy gels. Ran back to get them and then out I went. Unfortunately the pockets in my trisuit are very small and as I shoved one into it it hopped out on the bike so I just had the one gel for the bike.
No harm as I knew I had another in transition by my runners that I could use on the run.
So out on the bike and a 2k climb to start the course. Lovely!
I passed a few here and made progress into Roundwood. I overtook the women's leader at this time (Derval Devanney, unfortunately crashed at end of bike but is fine thankfully).
From there it was a flat ish 10k or so into Laragh and then a left turn and about 8k of rolling hills and descents. Tough in parts and no real chance to get good speed up. The turn around point is at 22.5km and back to Laragh then. Now for the hard part!
As leaving Laragh there's a left turn onto oldbridge road. Straight into easiest gear and up the hill for a steep climb. This stretches and then eases before another climb and gentle descents.
This continues until the final hi at 37km. Heartbreakers just when you think there can't be anymore!
After this it's a sharp fast descent that was dangerous so it was a no pass zone. Into transition then and I had made up some more places. I made it around 32nd at that stage based on counting bikes ahead by the turnaround and passing a couple.
Onto the run then and I decided to chance no socks. I grabbed my last gel and as I was starting the run I tried to put the gel into my god damn small Pockets and again it hopped out! I left it and kept running figuring it would be fine. So again a 2 km steep climb before easing to gradual inclines. Tough way to start the run but I made up a place and kept going. The turnaround was at 4.5k and then a couple descents before another rolling hill then finish with a 2k descent. I made up another place but also got passed here too. Around half way I started to feel my feet blister. I cursed my saved 30 seconds for no socks and probably lost that and more from the pain. Could be worse though so I managed a sprint to the finish line. 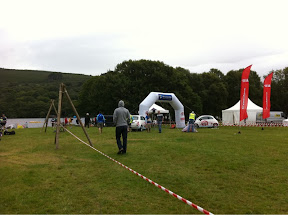 This ended being 29th and my best finish so far. Only 210 started though but still a good result. The winner was Brian McCrystal in 2:06 odd. Some motivation there as his swim was only 2mins faster than me. The man is an animal on the bike (trek speed concept with Zipp disc rear) and I think he's a cat 1 bike racer. Also a damn fast runner so he's the rare exception to the rule that you need to be a very fast swimmer to win.
Don't get me wrong his swim is good but there are guys like fish these days. Impressive to see him recover and beat a 5+ min deficit out of the water to Bjorn Luddick who's not too shabby at biking and running either and has a few race wins this season.

More impressive is that Brian works full time like most of us, and has a family so clearly he's a dedicated athlete to train and be able to produce at his level.

The beast of the east had some superb prizes at the end including Htc phones, garmin watches, zoot runners, bike fits, swim analysis as well as cash and vouchers for the age group winners. Fantastic for such a relatively small entry field.


It was a very well ran and organised event and despite being the hardest, was definitely one of the most enjoyable races this year.
I will be back again next year hopefully further up the field... Much further.... 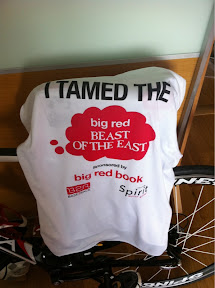