So Sunday 31st July saw me reach my 1 year anniversary.
Yes it was this race 12 months ago in Dun Laoghaire that saw me complete my first triathlon and get firmly hooked from there.

Focus Ireland is a noble charity that performs work in Ireland for the homeless, and so this was my worthy cause to enter the world of triathlons when a work colleague was doing it and asked if I'd join in.

So, here we are, assuming similar weather conditions I would finally get to accurately measure what 12 months had saved time wise.
The course was the same on closed roads early on Sunday, and the only variable was twice as many entrants this time so bound to be more transition traffic and also on the bike and run course (and swim depending on waves). Weather conditions

I was excited to measure my improvements, and also had this race targeted as a Podium result and one of my A races this year.
Training last week didn't go quite as planned - I did the beast of the east last weekend and the 10k run was done sockless which left a few skin grafts/blisters as wounds. a silly mistake and resulted in very little running training as I wanted the cuts to heal fully for Sunday.
Swim and bike were fine though, and I felt a bit of progress in the pool so was keen to see how I went.

Last years results below, with a light wind and short run. 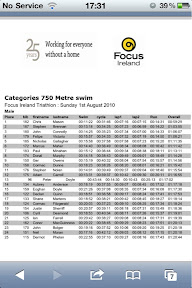 Interestingly the guys in 2nd and 3rd were from Pulse Triathlon Club which I subsequently joined partly as a result!

So I did the bike course on Wednesday as a refresh, and to see time and I was done in 33 odd, which would have got me 2nd bike split last year. I knew my run would also be similar ranked and so I was aiming for a podium.

So early start Sunday and off to registration. I should add all things are equal in that I'm using the same bike (addition of Tri bars this year), same model runners even and so it should reflect time improvements in each discipline.

I was in wave 3 this time and this meant a bit more traffic on roads, but they were closed so shouldn't be a problem.

Transition was tighter with the extra entries but still fine.
It was here I met with John Connolly and Dermot Duffy. John came 3rd last year and has improves this year so I was up against it. He finished some 16+ mins ahead of me last year.
Turns out there was a few more from the club there and we got a couple snaps at the end. 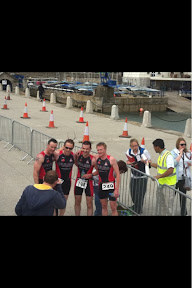 So I started the swim near the front of my wave and went out well, stayed with the front to first buoy but tired and dropped off a bit then.

Out of the water in 14odd and up the steps to T1. I noted John and Dermot's bikes were gone so i had work to do! A good transition and I was out starting my bike lap 1 of 4. Now the bike is my strength and I go out hard and try to hold the pace. I'm monitoring my laps and making good pace as passing a good lot. At this stage I'm not sure how many are ahead from my wave but at least the 2 Pulsers, but race hard as I know a couple fast guys are here for glory.
Now it was much windier than last year and so the bike was slower.

I complete the bike in 34odd and dismount into t2. As i was entering t2 i hear the mc saying 2 pulse guys have started their run so not far ahead. I take the extra 10-20 seconds to put on socks this time and start the run lapping my garmin. I've targeted 3:45 or better pace per km and am pushing to reach and hold this. I reach the turnaround and see the guys are within catching distance. I keep pushing and chase Dermot down on lap 1 and try to catch John but not quite. There's a serious headwind on way back each lap and it slows me a good bit. I finish almost a min down from him and happy with my performance. My time was 1:07 which I thought was slow but it was much windier and a slightly longer run also.

Now the waiting game but it looks like I may be close to a podium.

We wait a while for the prize giving to find out the results. 3rd place Ian Farrell so I'm delighted, objective achieved. John won and finished under a minute ahead.
John's time is slower than last year representing the wind and longer run.
At a guess I've made around 15-18 mins progress over sprint distance in 12 months. Pretty happy with that.

So a great way to celebrate my 12 month anniversary and achieve another goal for this year. I win €100 voucher for Cycle Superstore and I'm
Actually delighted as 1st and 2nd got mountain bikes which I've no need for and prefer the voucher! 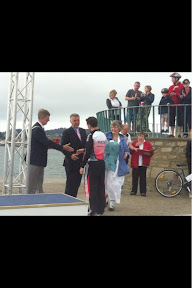 I'm also delighted at being so close to John. He did do an Olympic the day before in fairness so may have had some more in the tank. John beat me by 3mins in Athlone so I'm
a bit closer now it seems.
Great to have 2 Pulser's on the podium, and Dermot only just behind so almost a clean sweep!

Onwards and upwards....
And I still have to get a TT bike :)

Swim and run my main focus for next few weeks before last race.
3 triathlons remaining in my calendar so 2 hard weeks of training ahead now until
next race. 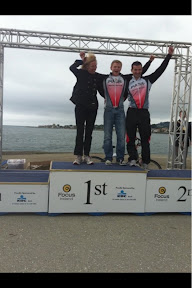